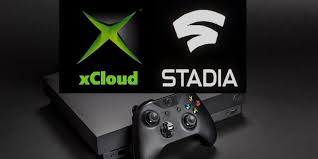 First, Bethesda Softworks announced at E3 their Orion gaming software platform which could greatly improve cloud gaming performance while requiring slower internet speed, for all the different game streaming services. It can be added by game developers into their game engines. If true, the Orion system can actually make these streaming services much more likely to succeed! Conceivably, other software systems may well pop up to achieve similar goals. Also, there is talks about new compression technology that will allow for much better game streaming experience. So there are ways to get around limit due to lack of lightening fast internet speed. Of course, ultimately there will be super fast internet speed everywhere, but even before that is ubiquitous, there are clever ways of improving cloud game play using more advanced technology.

This is a good article about Microsoft’s vision for Xbox and Xcloud. Microsoft wants more gamers to sign up for Game Pass. It’s not just about selling more consoles. Gamers can use their consoles to stream to their mobile devices. Gamers can also use Xcloud to stream to their mobile devices. Microsoft wants to go beyond the current platforms (like PS vs Xbox) and capture the mobile gaming space, where there are increasingly more players who spend more time on cellphones. In short, Microsoft not just want to be in PC, in consoles, in streaming, in game developing, in mobile gaming, but in all of these areas. Microsoft can aim for that goal because they are already dominant in PC (through Windows), with Xbox, with their in-house game developers and using their Azure cloud backbone.

Xcloud is a game streaming platform. Gamers can stream from their new Xbox console or from Xcloud, using the same AMD supplied hardware. Game developers will only need to develop for the same hardware, and the games will perform the same, whether on consoles or on Xcloud.

Stadia does not have their own consoles. Stadia will be platform agnostic. Stadia will stream through the Chrome browser to PCs, cellphones, tablets and TVs with Chromecast.

Another big difference is that Stadia will allow game developers to use the Google datacenters as their development platform. This benefits the developers because they will code once for all the different platforms. The gamers on Stadia will not need to invest in different hardwares.

It should also be pointed out that Google intends to blend YouTube with Stadia for game broadcasting, which will be to their advantage.

It is way too early to tell how Stadia and Xcloud will succeed, or who will “win”. It is very comforting to know that both will use AMD hardware!